Hospice patients treated to life in the fast lane

Run completely by volunteers, and in its 10th year, those with terminal illnesses and their support people were treated to laps on the track, some going speeds of more than 200kmh.

The Race4Life Trust was created to fulfil the wishes of palliative care patients - kind of like Make A Wish, but for adults. The aim is the same: to create memories families can cherish. 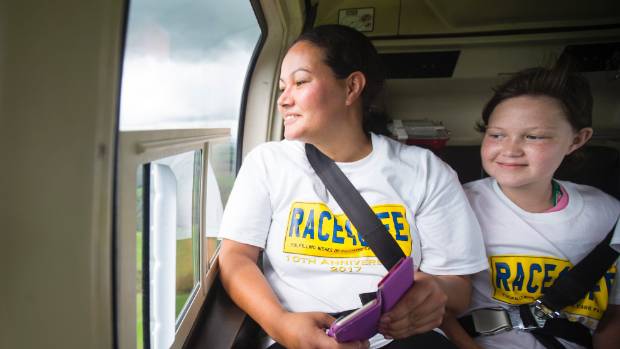 Leukemia patient Olivia Kelsey with her mother, Katarina Kelsey, enjoying their helicopter ride, this time it wasn't to Starship Hospital.

Also on offer on Tuesday were rides on a helicopter, Harley Davidsons and classic cars

Hamilton mother of four  Aroha Andrews was there with partner Sam. 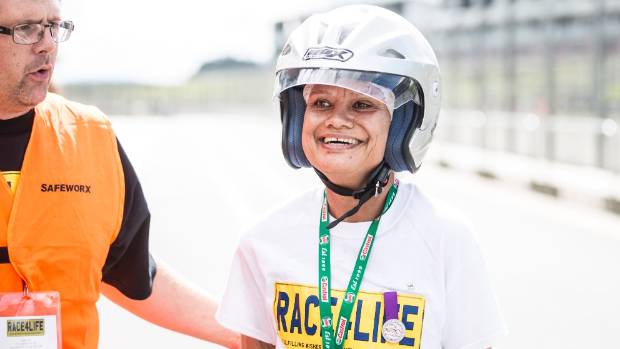 Peggy Glover enjoys a ride around the race track in a hot car.

Her spine cancer was pushed to the back of her mind while she was passenger in a red convertible.

"You just forget about everything that's going on, you feel normal."

It was all smiles being able to experience her first helicopter ride and being driven around the track.

Pain in her back meant Andrews took it slow during the first lap, but adrenaline kicked in and she gaves the thumbs up to go faster.

Meeting retired Holden V8 racer Greg Murphy was one of the highlights.

"I'm a Ford supporter but when it's Greg Murphy, come on," she said.

Andrews was especially grateful for the volunteers, organisers and sponsors for giving her and her partner the experience.

Despite the terminal diagnosis, there's no point in dwelling, she said.

"I intend to come back, you look to the future, you can't think I may not make it."

Amongst the thrill of it all, Murphy drove one lucky raffle winner for a hot lap in a V12 Ferrari.

Murphy said took part in the event's earlier years and this year he had the chance to join in again.

"I'm really humble to be part of it.

"This thing that Race4Life foundation does, it just puts a shiver down your spine."

And talking to the patients puts life into perspective, he said.

"There's so many people suffering through different forms of ailment, what do you say?"

Reaching the milestone of a decade has been surreal for organiser Viv James who helped found the event whilst working at Auckland's Mercy Hospice.

"One of patients had an interest in cars and before we knew we were in Pukekohe with 18 cars and 15 patients" she said.

It was deemed so successful, the decision was made to make it an annual event.

In May 2015 the not for profit charity was formed and took over the running over the event.