Ken Carter drives his mobility scooter up from Te Kauwhata's retirement village to its latest subdivision "for a nosey" a couple of times a week.

Te Kauwhata is rapidly developing into a suburb of Auckland, the town is going through a massive housing construction phase with large housing areas been developed on the fringe of the Waikato town and its primary target is Aucklanders.

He sees orange bulldozers prepping acres of bright red soil for houses on Swan Rd, transforming his rural North Waikato hometown into what he suspects might be the southern most suburb of Auckland.

As other rural towns throughout New Zealand hemorrhage people, Te Kauwhata has been re-zoned to potentially quadruple its current population of 1,500 in the next decade. Aucklanders fleeing Auckland have snapped up the majority of sections sold so far.

Octogenarian Ken Carter has lived in Te Kauwhata all his life - he think its growth is marvelous, but worries about its impact on the tight-knit community who have been there generations.

"It's marvellous for the town, really," says Carter, now in his eighties. "But I do wonder how all this development will change our community ... it's certainly changed our scenery."

Te Kauwhata is tucked away off State Highway One, 80kms from Auckland's CBD and 50km out of Hamilton. 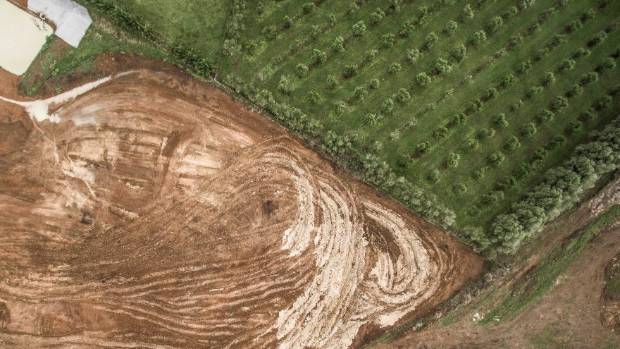 The few vineyards left in Te Kauwhata are rubbing shoulders with new subdivisions.

There's a palpable community spirit born out of families living side by side for generations; everyone knows Gilbert Powley, the octogenarian taking it upon himself to prune Te Kauwhata's road-side roses every year.

Then there's the man who cycles to town each morning, scouting for fresh graffiti to erase. You'd be hard pressed to find a local who wasn't a member of at least one of the thriving volunteer-run clubs.

It's the type of place that inspired John Mellencamp's 1985 hit Small Town. 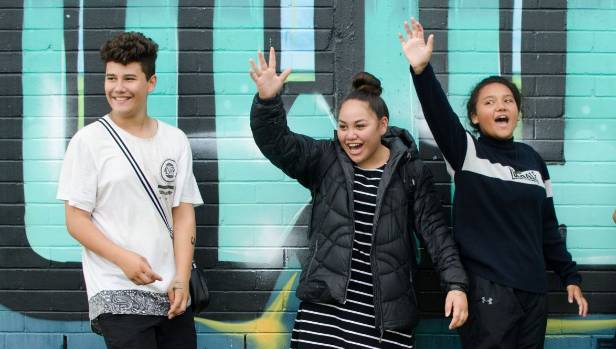 Jarrod, Chelsea, and Kaesha go to school at Te Kauwhata College and reckon the town is a pretty decent place to grow up.

You can almost see the "hayseed" mentality he sung about and the 14-year-olds who sit outside the town's Four Square who say they wish they lived in a "proper and cool city like Huntly".

Huntly is the next town south and has 7000 residents.


However, the teens are glad Te Kauwhata is growing, even if it means they don't recognise everyone in the supermarket anymore. 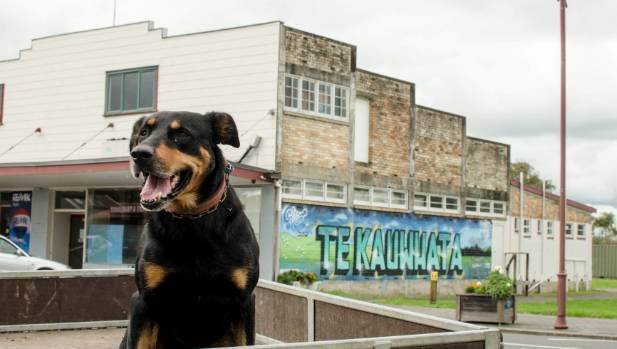 Te Kauwhata village is a hub for local farmers, so farm dogs on the backs of utes are a regular sight.

Across the golf course from Swan Rd is Te Kauwhata's first high-density subdivision, Blunt Rd, where growth-by-construction kicked off in 2015 after a few false starts.

Generation Homes bought 51 of sections on that road – most of them sold out to Aucklanders within three months.

Newcomers tended to be semi-retired or prepared to commute back to the city for work, as the town has little industry. 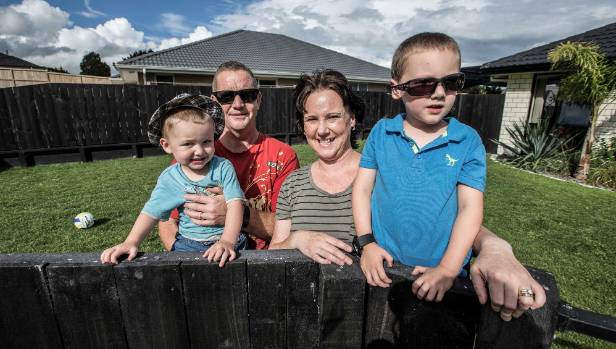 Jeremy and Karen Biddick moved with their children, Joel, 4, and Mark, 2, to Te Kauwhata after 18 years in Auckland. Jeremy still commutes to the city for his job, but is spared traffic woes by working shifts.

Train driver Jeremy Biddick commutes to south Auckland daily. He and his wife Karen moved to Blunt Rd from west Auckland a year ago, to give their young sons a country childhood and to save money.

The Biddicks sold their old three-bedroom home in West Harbour to buy the four-bedroom brick house built to their specifications in Te Kauwhata  – they pocketed a handy $150,000.

Jeremy's early shifts allow him to skip Auckland's infamous traffic clogs and it takes him 40 minutes to drive to Wiri. It would take him an extra half an hour if needed to be at work by 9am and a gruelling two hours and 20 minutes to reach the city centre from his house during rush hour. 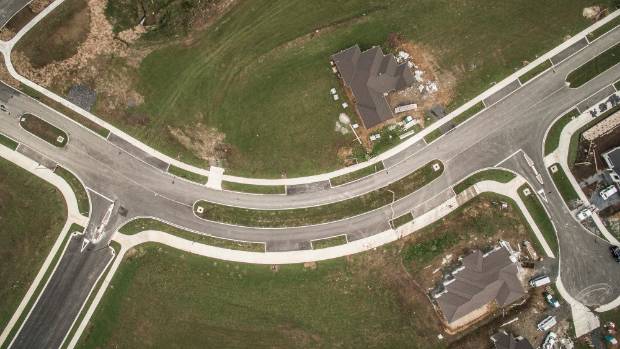 Karen found part-time work at the local high school, and says she is glad her pre-school sons get to learn that milk comes from cows not bottles.

"It's just such a lovely atmosphere to bring your children up in." 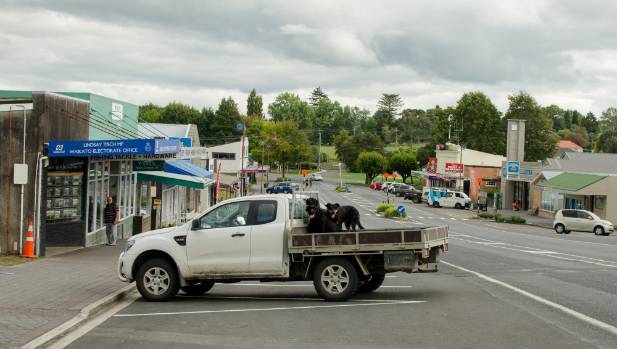 The main drag of Te Kauwhata.

"The only thing I really miss about Auckland is the shopping," she says.

To make way for people like the Biddicks, curving cul-de-sacs are being carved out of hillsides, then rapidly lined with big brick bungalows on relatively small sections.

Many have views of vineyards, where the town's famously fat, black and juicy grapes get grown. 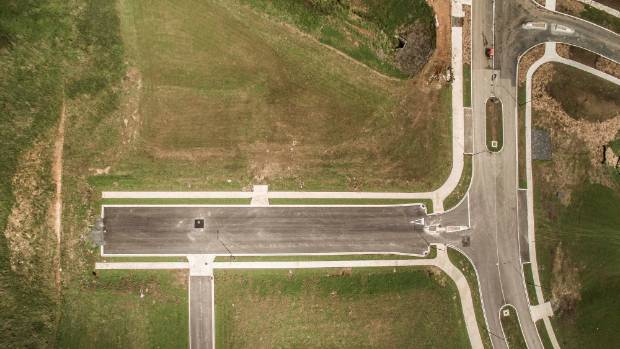 Fruit is sold on the side of the road when it is in season, alongside fresh eggs that are sold all year, and horse manure, which is free.

These former vineyards, orchards and pastures in Te Kauwhata is now land under development.

Houses like the Biddicks' don't come cheap by national standards, but Aucklanders don't live by those. 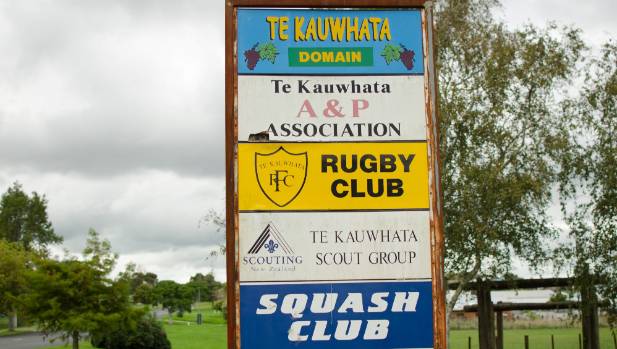 New three- to four-bedroom homes in Te Kauwhata sell for around $600,000 on Trademe; in Huntly, 20km south, you can get an older house for less than half that.

The same distance north, in Pokeno - another Waikato town scooping up the Auckland spread – but without the amenities or village life of Te Kauwhata – new house prices are closer to $800,000.

Ahead of the hordes and house price hikes, Jan Sedgwick moved down from Auckland 12 years ago and was elected onto the local council in 2010. She's an advocate for the town's growth. 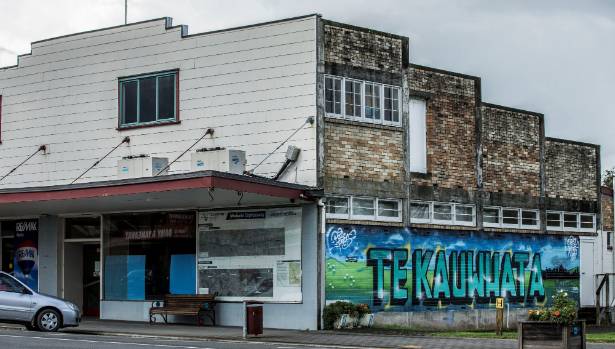 Every few years the Te Kauwhata mural gets repainted by local school kids.

"Firstly, it's tremendous for local businesses. Secondly, it offers a wonderful lifestyle – there are still people who do things here for other people without any thought of reward - and its location is so convenient." she says.

Te Kauwhata is 10 minutes from family-friendly Hampton Downs motorsport park, half an hour from the fish-filled Firth of Thames, and an hour west of the Coromandel.

The village has a fancy new library, schools, a doctor, a hairdresser, an op shop, and two Bakehouse Cafes, run by rival Cambodian families. 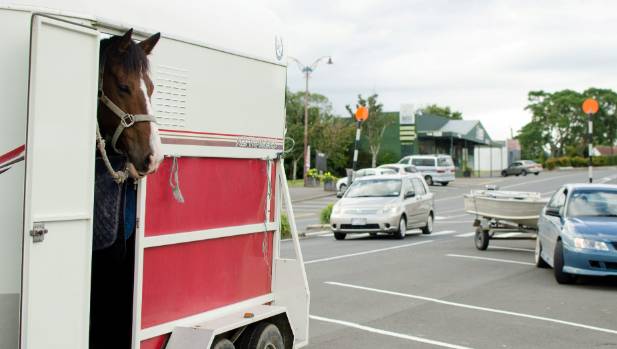 It's not unusual to see horse floats and boats parked down the side of the town's main street.

The nearby West's Hardware store has been run by Maurice West for 45 years selling everything from beetroot seeds, to dining tables and anchors.

West says his business is booming thanks to the subdivisions, just as a man walks in and asks for the unlikely combination of a hunting knife for his girlfriend and some tennis balls.

The only way to distinguish between those who've been there for awhile, and the newcomers is the pronunciation of the town's name. 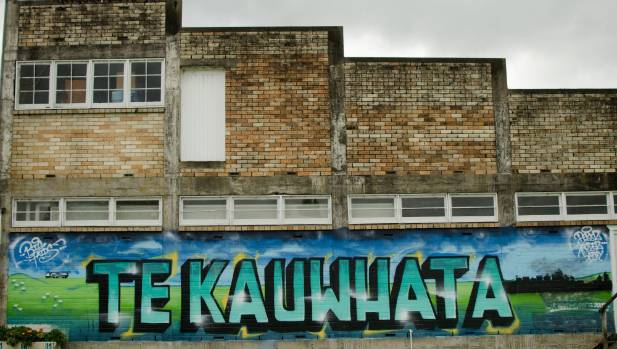 The town's increasing population has stirred three significant rumours with both old-timers and newcomers – They want a bigger supermarket, a train for quicker commutes to Auckland, and a clean lake.

Sedgwick says the first is easy to answer. The current Four Square will be bowled to build a New World by the end of the year. But she does not advise residents hold their breathe for the other two. 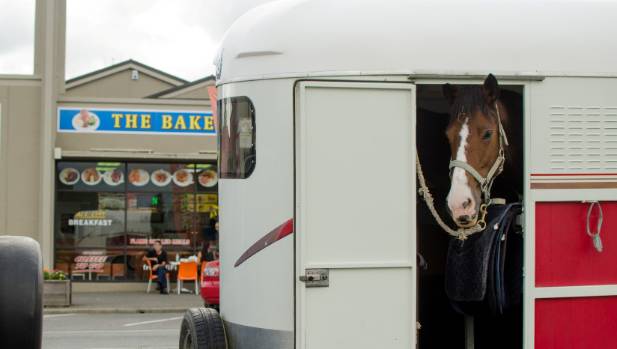 While Te Kauwhata is on the main trunk railway, it's a single track, but there isn't a train station.

Sedgwick doesn't think one will be built any time soon. For now the only public transport out of town is a bus to Pukekohe every second Thursday.

Lake Waikare is also problematic. One of the least healthy lakes in Waikato, it is infested with carp, haunted by fertiliser runoff, turgid and very shallow. 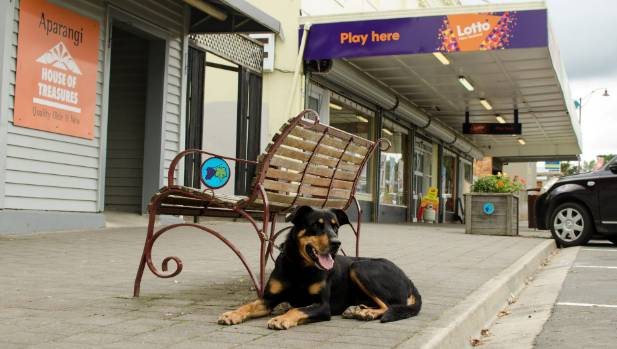 Huntaways, not cavoodles, get tied to park benches as owners shop at Four Square.

"Despite a very concerted effort to clean it up, you're not going to get a lovely lake any time soon," Sedgwick admits.

Seventy-five-year-old Joe Lloyd lives on Swan Rd, up from the subdivision on a 400-hectare farm, and has noticed rural living is relative when it comes to Aucklanders.

"These new houses are all so crammed together there's barely room to swing a cat."

"I think they should be making bigger sections because living in the countryside is about having a bit of land for a vegie garden, and perhaps a milking goat or a pony."

Lloyd is also afraid Te Kauwhata's generous community spirit might weaken as its population grows too big for everyone to know each other.

"There is a risk people will develop a 'someone else will do it' mentality – though I'm not sure what sort of size that cuts in at," he adds.

He believes between 500 and 1500 people was an ideal size "to live by each other and with each other".

"We're a one horse town, so if you want to go down to the pub on a Friday night you have to drink with everybody.

"In a bigger town that's not going to happen – you'd have the doctor at a different venue to all the workmen with their boots, bush singlets, and tattoos.

"But here everyone gets on with everyone, more or less, and that's pretty special."

While Lloyd is a tad apprehensive about his little village's future, he admits growth is better than the decay many rural towns are suffering throughout New Zealand.

"I'd rather see these ticky-tacky new houses up on Swan Rd than shut shops and roller doors down everywhere."