A multi-million dollar poultry farm and hatchery is set for Huntly signalling a new industrial era for the area.

US-based Cobb Vantress Inc has Overseas Investment Office approval to buy149 hectares in the rural North Waikato settlement of Rotongaro, just outside of Huntly, for its $58 million investment.

The approval was welcomed by Waikato mayor Allan Sanson who said it was just the beginning for new industry in the area with other companies also looking in Huntly's direction. 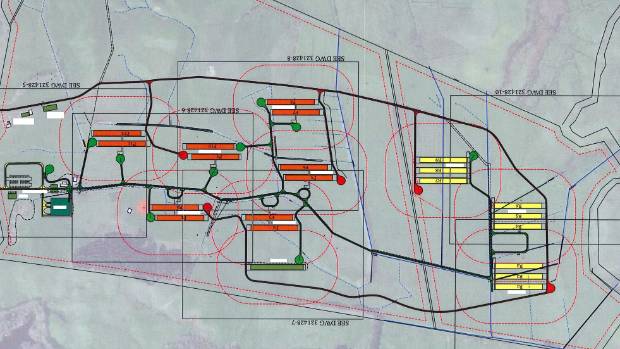 The indicative design for the Cobb Vantress Inc poultry farm and hatchery to be built in Rotongaro near Huntly.

News of the chicken venture has come just in time for Huntly. The town was hit with the closure of the Huntly East Mine in 2015 which came with more than 60 job losses.

Latest figures from the 2013 census show the unemployment rate for Huntly West was 23 per cent and 11.5 per cent for Huntly East.

Cobb New Zealand general manager Duncan Granshaw said the chicks bred at the site would meet a growing demand in the Asia-Pacific region.

Granshaw said locals would reap the benefits of the new development.

"We're really pleased to go into an area where there is high unemployment and where there has been redundancies," he said.

Granshaw said the business hoped to integrate into the community and local companies would be sourced for its upkeep.

Discussions have been in place with social sectors and high schools and would continue leading up to the start of recruitment in October when the construction phase will also begin.

"We don't see why we shouldn't employ people from Huntly, we'll be advertising locally and recruiting locally."

The first vacancies filled will be specialised areas and following that, those needed on the ground floor would be put into training.

Chicks will start occupying the established spaces by mid next year with the final completion date set for 2019.

The chicks will be barn-raised and Granshaw said the welfare of the poultry would be of top priority by providing plenty of space, food, water and natural mating.

Following exportation, mainly to Cobb's distributor in China, he said technical advisers would keep track of the chickens through the breeding programme.

"They're paying a high price for genetic stock and it's in their interest to get the best possible result.

"They're looked after very well, we're not talking about sending them to a small battery operation...We're very aware of what happens to them."

Sanson said the council had been working towards creating an environment for new industry in the area.

"We're looking at turning Huntly into a large employment node, with existing infrastructure Huntly is well-located for new industry," he said.

The council had looked at how to accommodate new businesses moving into town with the re-zoning of land.

Granshaw said New Zealand was chosen for its investment because of its health status.

Huntly ticked all the boxes as it was isolated from other poultry farms, close to the main highway and near a well-populated town and a former dairy farm.

The operation is unique as it requires workers to undergo stringent hygiene practices prior to starting the work day.

Before entering the facilities, employees must shower, cleaning their entire body including hair and nails at the site for five minutes and dress in the provided uniform.

They are then transported to where they will be situated for the entire shift and must repeat the showering process before starting.
A third shower, while not compulsory, is offered at the end of the working day.

The need to maintain high levels of hygiene is due to the value of the stock and if one chick becomes sick, the entire stock could be dispatched.

"The value of this is high, a lot of that money will be retained here," Granshaw said.