Starting about AD1500, Maori started fortifying their villages. What had been open communities became defensive pa. It was a huge construction exercise that resulted in something like 7000 pa being built across Aotearoa in about 350 years.

This turn towards walls and protection – and their approximate age – has been known for years but now scientists have applied a technique that can date some pa with much higher precision.

If won't necessarily answer "why" Maori needed to fortify their villages, but it gives a much clearer answer on "when". 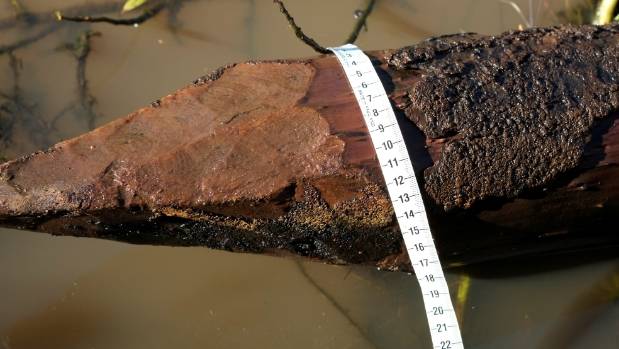 The posts were not embellished beyond skillfully sharpened points. This suggests they were chopped and planted in the ground immediately.

The knowledge arises from a study of wood palisade posts found at Otahau Pa, north of Hamilton in the Waikato.

The builders planted posts upright in the ground and filled the spaces between them with beams and horizontal materials, much like today's fences. Today, only the posts survive and even these are mostly stumps. 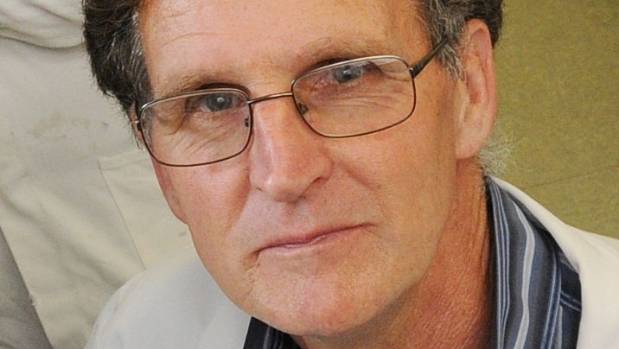 The dating research was led by associate professor Alan Hogg, director of the Radiocarbon Dating Laboratory at the University of Waikato.

It's now believed the fortification was constructed in AD1768 plus or minus four years, according to a recent paper in the Journal of Archaeological Science: Reports.

But radiocarbon dating has limited value with materials that are not especially old, he says. Many Maori artifacts from about AD1500 and later fall into this category. 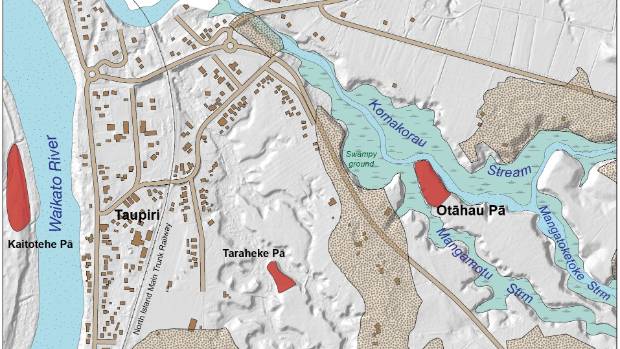 Map of Otahau Pa and area, north of Hamilton.

"Radiocarbon ages don't equate exactly to calendar ages. When you get a radiocarbon date, it might be very precise, for example  it might be 350 years plus or minus 15 years," he says.

"But then you need to convert the radiocarbon age to a calendar age. When you do that, you can get a calendar age range of plus or minus 70 years. It's no more precise than that."

To get through this problem, Hogg and colleagues used a technique called "wiggle matching" that compares radiocarbon deviations in wood of a known age to wood of an unknown age. Palisades posts from Otahau Pa were well preserved because they were immersed in swampy ground,

The Waikato was a centre of Maori culture and among other things developed important kumara gardening techniques. But knowledge is limited.

"At the moment it's confusing," says Hogg. Current knowledge is "mostly developed from Maori oral traditions. They know who lived in particular pa, who the chiefs were and there are details about the Maori wars and tribal movements and some information about gardening and kumara cultivation."

This traditional knowledge is supported by archaeology and its supporter, radiocarbon dating.

Wiggle matching could be "the touchstone or Rosetta Stone" of Waikato and Aotearoa history, he says. The Rosetta Stone unlocked ancient Egyptian hieroglyphics.

"By getting really accurate and precise dates on various sites, then we can the align oral histories from the various hapu from within the Waikato and build a coherent history of what Maori have done since 1500," Hogg says in an interview. "That's the bigger picture."

Speaking on behalf of colleagues with expertise in the field, Hogg says the Otahau Pa posts were not carved or embellished except for "skillfully sharpened points".

It appears pa inhabitants exploited a forest of newly growing trees, especially miro, and weren't "fussy about what they took", Hogg says.

The evidence suggests the posts were chopped down and immediately placed in the ground. "It looks like it was done quickly, perhaps in response to some perceived threat," Hogg says. "We don't know what."

The posts were planted in wet ground. Other sharpened posts were found in creek bottoms.

The technique probably wouldn't be valuable in dating a spear from the period, because the whole tree width wasn't available, Hogg says.

The Otahau Pa project was a test case to see if accurate calendar ages could be calculated and whether the technique was cost effective.

It worked out in both cases and Hogg says wiggle matching could be used on pa sites across the country, provided they were swamp pa or the whole width of wood had been preserved by water.

"There will be lots of pa in New Zealand that have preserved palisades posts," Hogg says.

"We want to start in Waikato, where there are unusual relationships between pa construction and [kumara] gardening."

"We expect to find preserved palisades posts anywhere there are swamp pa."

Maori living today near Otahau Pa were surprised by its age. They thought it was probably older, Hogg and colleagues reported in their paper.